Learning from others and making it your own.

In my last blog I talked about taking the envy that you feel for other artists’ work and converting it into something positive that enriches your own endeavours. In this short blog today, I thought I would give you an example from my own experience to illustrate what I was talking about. In the early nineties, I was struggling to find my style and to improve my technique. I was finally having some success and making a few sales here and there. My watercolour technique, in particular, had reached a stage that I was happy with and I was producing paintings like Talkin’ Pigs and Pie and Chips: paintings of people going about their daily lives. 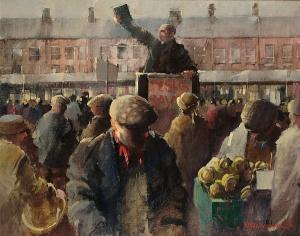 My oil painting however was another story. I just couldn’t get the same quality in my brushwork, no matter how hard I tried and then I was lucky enough to have a chance encounter with an artist by the name of Lawrie Williamson. At the time I was in my early thirties and Lawrie would have been of a similar age to me now. I greatly admired Lawrie’s work. There was something about the way that his figures emerged from their environments with such an economy of technique: an understatement that gave you just enough information to establish their characters, like in this picture The Lay Preacher. 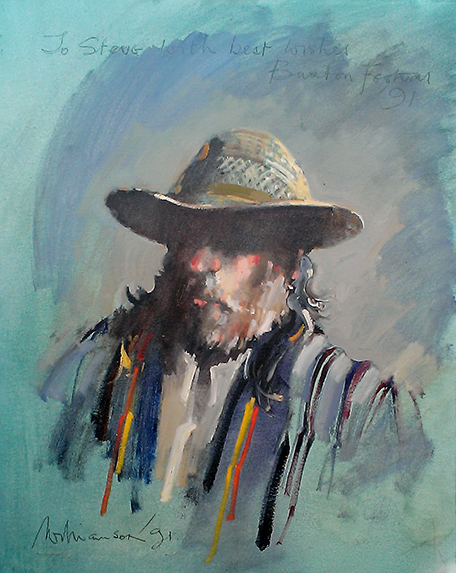 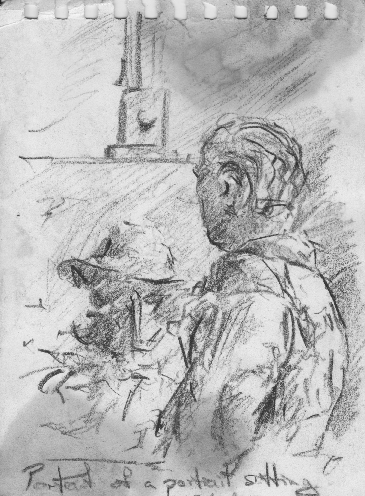 I was lucky enough to be able to watch Lawrie at work one day, as he painted my portrait. Unlike most portrait painters, myself included, who set up their easels to face their subject, Lawrie on the other hand faced the canvas away from me and would turn and look at me then turn back to the canvas to apply the paint. This gave me a wonderful opportunity to observe his technique first hand. I drew a small sketch of him as he worked, applying thin glazes of paint direct to the canvas and taking a rag to them to remove areas to leave exactly the transparency that he wanted. He worked the entire canvas like this before finishing off with just enough judicious touches of opaque paint to imply the right amount of detail. I was transfixed watching him work. I wanted to be able to do that!

Over the next week I tried repeatedly to emulate Lawrie’s technique, but no matter how hard I tried it was just not happening. The thing I had forgotten was that I was not Lawrie, I did not have his life experience to put through my brushes. It’s like the guitar analogy that I made yesterday: the guitar is basically six strings stretched across some bits of wood, but in the hands of a million different players it becomes a million different instruments. The same thing goes for paint and it is, in many ways, what makes art so special. You see, the way I look at it is, that the paint is just a way for us to put our humanity into an image. Everything that we are; everything that we have been, is embodied in our work. So trying to paint like Lawrie was getting me nowhere and leaving me totally frustrated.

Then it all came clear to me in a flash. It was a real Archimedes moment. I was standing in the Pavilion Gardens in Buxton, working on another unsuccessful oil painting,when I suddenly realised how I could take what I had learned from Lawrie and make it my own. Packing up my equipment I rushed across town to my studio, grabbed a small canvas and produced the small oil that you see here Milking Seraphim. Suddenly I could do what I had been doing in watercolour, but in oil. What I had done was translate Lawrie’s transparent wash methods into my style instead of struggling to mimic his and from that day I never looked back. I still love Lawrie’s paintings, but I no longer feel that envy: I no longer wish I had painted them. I am however totally indebted to him for giving me the opportunity to grow as an artist and further my own technique. 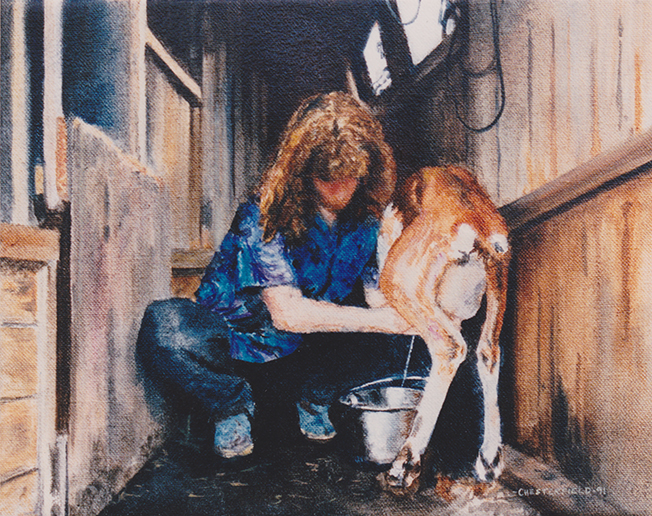 Keep up to date with Steve

If you would like to be kept up to date with what I am doing, please add your email in this section.

I promise that I won't inundate you with spam, just the occasional email to keep in touch and to let you see my latest endeavours.