07939 921104 steve@stevebirdartist.co.uk
So there I was, twenty eight years old,  having a vague memory of having once wanted to be an artist, wondering where you actually start and what being an artist actually means: to me at least. Because there are many different ways of being an artist aren’t there? There are those who are happy to hold down a full time career in the city and paint for pleasure at the weekend: I could never do that, I am very much an all or nothing person. Whatever I do gets all my energy leaving nothing for anything else, more of which later. There are those for whom concept is everything. Well, as I mentioned in the first part of this story, I am naturally empirical and if anyone is going to tell the emperor that his willy’s on display for all to see, it’s me. Just don’t start me on the subject of canned artist’s faeces or dirty unmade beds unless you really enjoy listening to the embittered ranting of a middle aged man. There are about as many ways of being an artist as there are artists: what kind of artist was I going to be? I was about to spend the next few years finding out.

The first thing was to try and remember how to paint, or as it turned out, actually to teach myself how to paint properly, because as good as the art I did at school, in the sixth form and in my short time in further education was, nobody had ever thought to teach us how to paint in watercolours or in oils. Everything was always done with those big round blocks of poster paint, which I don’t think Rembrandt, Turner or Monet ever used and, remembering my meeting with the careers officer (see part 1 of this story), I knew that if they didn’t use big round blocks of poster paint, then maybe neither should I. So off I went to the local art shop to buy some watercolours and I soon realised that I had no idea what I was doing. You see unlike the BRB’s (big round blocks) watercolours were transparent and well, for want of a better description, watery. Back in the eighties we weren’t lucky enough to have YouTube. Nowadays anything that you want to learn is just a mouse click away, but back then it was books. Books, books and more books! I read everything that I could read, experimented with every technique that I could, studied every “ism” and most important of all visited every gallery that I could to see the masterpieces in the flesh. I literally began to live and breathe art. Slowly it began to make sense. I tried watercolours, acrylics, oils, pastels, you name it I had a go. I painted landscapes, still lifes, abstracts, everything I could, with varying degrees of success. Everything that is except people. I tried that, but with little success. Painting people was scary. If a bottle or a tree didn’t look exactly like the actual subject, nobody really cared, but with people you had to get it right or everyone would know you were rubbish!

While I was busy teaching myself how to paint, we moved to live in a small house with a couple of acres of land in the Peak District near to Buxton. It seemed idyllic. The landscape that we were living in the middle of was powerful and dramatic. I was going to paint amazing scenes of the Derbyshire countryside. Or so I thought! You see I soon realised that every artist and his granny was painting Peak District landscapes and I didn’t want to be doing what everyone else was doing. I wanted to stand out from the crowd, but how? Then one day I was in my studio (I was lucky enough to have been able to rent the old village school for £5 a week) surrounded by my many different artistic experiments and wondering where it was all going when I decided to try and paint a portrait. I sifted through our family photos and found one of my daughter Jess when she was only a few hours old asleep on her four year old sister Jo who was also fast asleep. I squared the picture up got out a canvas and my oil paints and painted my first ever portrait. Here it is: 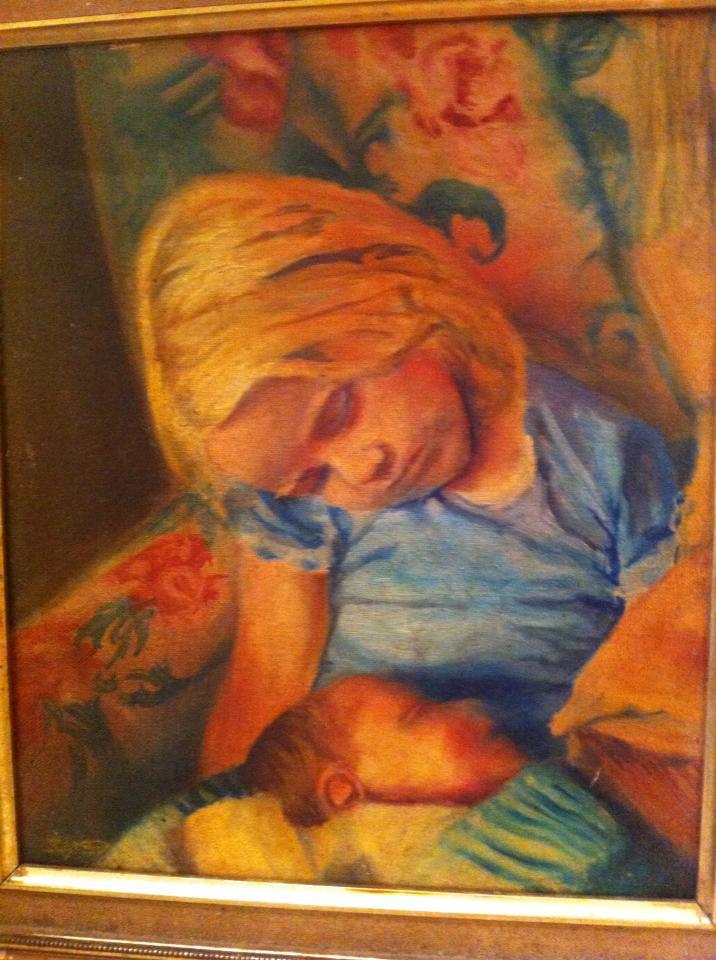 From this I learned two very important things about myself. One, that I love painting people and two (and I know this is a matter of great debate in the art world) I paint best when I work from photographs. You see, I think it all comes down to time. At school I was never good at exams because I could not perform well under pressure of time. I need to be able to sit down and work at my own pace and that is what photographs allow me to do. I can sit and study the image for as long as I like. The light isn’t going to change, it’s not going to rain, nobody is going to get bored and wander off. With photographs I have my subjects exactly where I want them. They are in my world and I am the master of what I create. Over the next couple of years I painted portraits of everyone I knew and I began to photograph people in shops and cafes and to work them into large, detailed watercolours with strong contrasts and the wonderful linear perspectives that you get in interior scenes. I was working hard and exhibiting in open exhibitions, but, as yet, I wasn’t really selling much. Somehow I had to find a way of turning all this hard work into an income.

I tried my hand at running a gallery in Sheffield for a while and managed to sell some work of my own and of other artists, but I soon found out that I was an artist and not a businessman and had to rethink my strategy again. The next thing that happened came totally out of the blue. I was sitting waiting for the kids to come out of school one day and passing the time sketching in the school gardens when one of the teachers passed by and saw what I was doing. We got into a conversation and when he found out that I was an artist he said “It’s the  May Fayre this weekend, you can come and draw portraits to raise money for the school” and before I could say “I can’t do that, I’ve never done anything like that before, aarrgghh I’m scared” he’d gone off to do something else. So what could I do. I’d said I was an artist. It was a matter of pride, I had to go through with it or never show my face in the schoolyard again. So that Saturday armed with a few sheets of paper and some sticks of charcoal I sat in the school gardens and drew portraits and people gave me money! It was as easy as that. I drew – they paid. Simple. For the next few years I was a regular attraction on the streets of various northern cities, sitting in my straw hat and candy striped blazer, drawing people of all ages and nationalities for a fiver a go. One day I drew twenty eight people – that was pretty exhausting! It was the best training ground in the world. I just sat day after day drawing people one after the other. I loved what I was doing and people loved watching. I well remember the shock on my first day in Sheffield City Centre when I turned round after drawing my first customer, only to discover a huge crowd of people gathered around watching me. I soon learned to love that crowd, because in that crowd would be my next customer. I could draw three or four people an hour and as long as that crowd was there watching, the sitters would keep coming. I realised something else about myself working the streets as well. I realised how much I love performing. I was back on the stage again with my own one man show. Sometimes when I finished a portrait the crowd would applaud – I was in my element!