07939 921104 steve@stevebirdartist.co.uk
While drawing people in the street was a great way of training the hand and eye, at the same time as making a few quid, it was never going to make any proper money or make my name as an artist. I had to find some way to grow things. I needed a “different” idea and eventually it came to me. I decided to paint what I called “action portraits”. Paintings of people pursuing their passions. So I set about putting together a few examples by asking everyone that I knew who had a passion if I could paint them. Before long I had a nice collection of people fencing, shooting, motorcycle racing, showjumping, to name but a few of the many subjects that I painted. I was now ready to take them out and show them to the world: but how to do that was the next hurdle.

You see at this point I had very little money so hiring exhibition space was totally out of the question – then I had an idea. I discovered that the North Staffs Hunt were just about to stage their annual point-to-point, so I got out a pen and paper and wrote a letter (no email in those days). In it explained that I could not afford a stall, but would it be okay if I displayed a few of my paintings behind my car on the car park and, to my delight, they agreed. So I made a very makeshift display out of cheap garden trellis and point-to-point today found me standing behind my car for hours on end, with the occasional person drifting over to take a look, but no sales or commissions forthcoming. This being my first day at anything like this I was feeling quite disappointed, but, just as I was about to pack up, a very ordinary chap in a flat cap and riding gear came over and began studying my paintings closely. Little did I know that this was to be a turning point in my life as an artist. It turned out that this man was the master of the hunt and out of this chance meeting I was commissioned to produce a large group portrait of the next point-to-point, but not just that: when I turned up at a local riding school just before Christmas to collect my deposit from the hunt treasurer, I walked out with three more good commissions for the owners of the riding school. It was a fantastic feeling, but this was just the beginning of the story. You see this led to me giving the owner of the school one-to-one painting lessons, which in turn led them to holding a night for me at the school where they invited all the people who had their horses at livery their to come and see my work. All in all, out of that one chance meeting with the master of the hunt came the largest commission I’d ever had; my first ever limited-edition print and, best of all, over 40 further commissions. It just goes to show that you never know what just around the corner and in the words of Mama Cass “the darkest hour is just before the dawn”, something which has proved to be the case many times in my life. 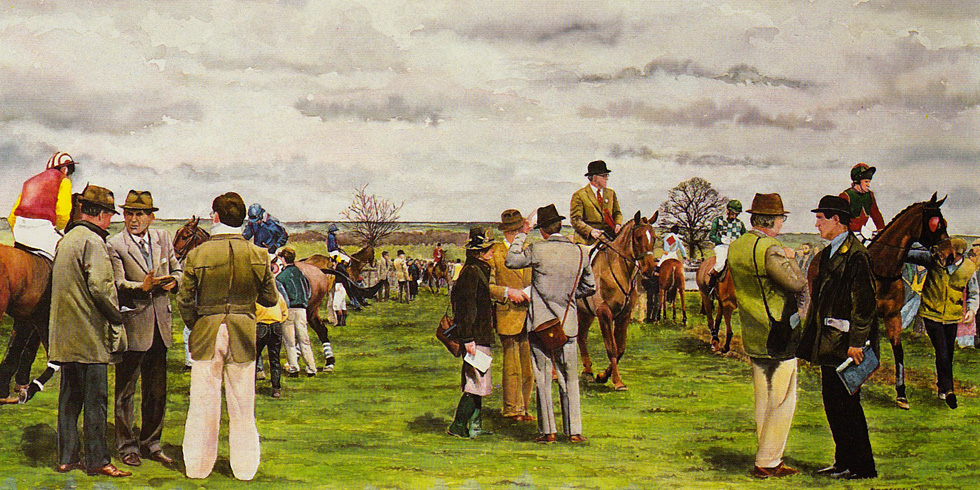 Around about the same time I had another sudden idea which came very much out of nowhere. If you remember, I was living near to Buxton in the Peak District: a beautiful hill town which also happens to stage an excellent arts festival each year. One day I was out painting in the town when I had a sudden brainstorm which led to me walking into the festival office and basically announcing “You don’t seem to have festival artist – while you do now!”. For the next two years, until I moved away from Buxton, I was given free rein to go anywhere I wanted during the festival and the rehearsal period leading up to it and each year I put on an exhibition called “As It Happens”. The second year, which was by far the best, my exhibition opened with 11 paintings produced during rehearsals and ended three weeks later with 33 paintings framed and hanging on the walls of The Old Clubhouse. This was probably the most enjoyable and successful of my endeavours of this period. I was marrying my love of the theatre with my love of art and best of all most of the paintings sold! 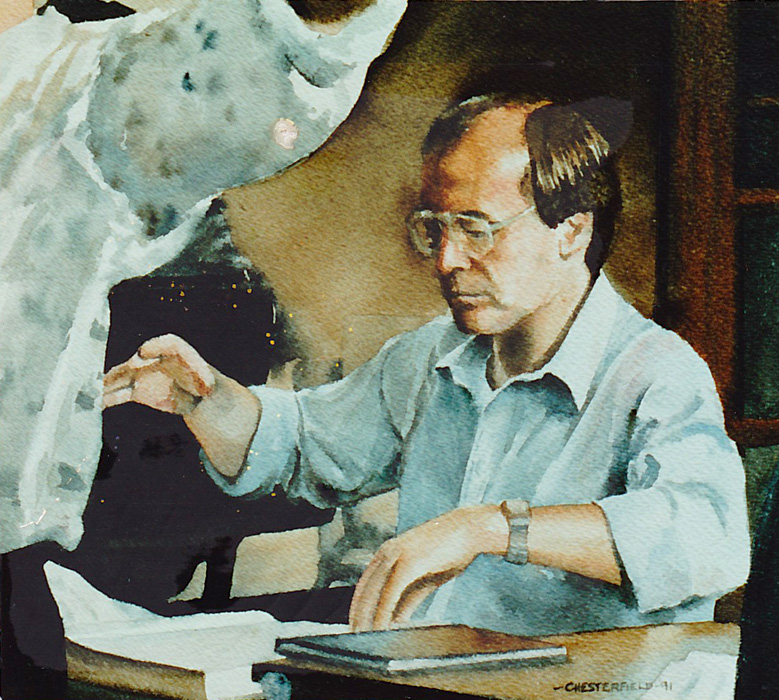 During this exhibition I also received one of my best ever compliments. I was hanging around the exhibition one evening when I found myself face-to-face with Gerald Kaufman (now Sir Gerald Kaufman, Father of the House of Commons) who was closely examining the paintings. He suddenly turned to me and said “He’s very good isn’t he”, a compliment made all the better as he had no idea that he was talking to the artist and I never let on.

After almost 5 years up in the hills sudden personal crisis led to my moving back to Stoke-on-Trent, the city of my youth. For the next two years I carried on with my art: painting commissions and entering exhibitions, until my creative energies began to move in a different direction. One day I was on the Tat market, as it is affectionately known, Newcastle under Lyme, when I bought an old nylon strung guitar for £5. I restrung it as it only had three strings and began to relearn how to play, having not played for many years. Over the next few months I played more and more and painted less and less as I rediscovered a love of music and of performing. The next few years saw music take over my life. I played in duos and bands and began writing my own material. One thing I have learned over the years is that I only have so much creative energy and if I go into something all my energy goes that way: so music took the place of painting.